The Asia-Pacific insurance market is the second biggest market globally and is valued at about USD 1.8 trillion in gross written premium (GWP). Among the top 3 largest insurance markets globally are two Asian countries: China and Japan. In the life sector, the Asia-Pacific market is even the largest in the world and the insurance industry in the region is even expected to grow, mainly driven by China, India, and Singapore. Currently more than 70 % of premiums in the region are concentrated in three countries: China, Japan, and South Korea.

Share of gross written premium (GWP) by country in 2020

Insurance markets in the Asia-Pacific region are quite diverse and are evolving rapidly because of fast economic growth and regulatory changes, though the markets have progressed very differently. This can be largely attributed to the different economic situations in the countries. A key characteristic of high-income-inequality countries, for example, is low financial inclusion, which typically equates to lower levels of insurance penetration (premiums as a percentage of GDP). Overall, both premiums and penetration have risen in the region. However, as their populations age, some mature markets have struggled, and consumer expectations shift.

The penetration of insurance in the region is somewhat below the world average. Hong Kong, Taiwan, and South Korea are the most developed insurance markets in the region. By contrast, insurance penetration is less than 5% in India, Indonesia, mainland China, and Malaysia, far below Hong Kong, Taiwan, and South Korea. This signals a significant unmet demand in Asia-Pacific’s developing markets and indicates further future growth. 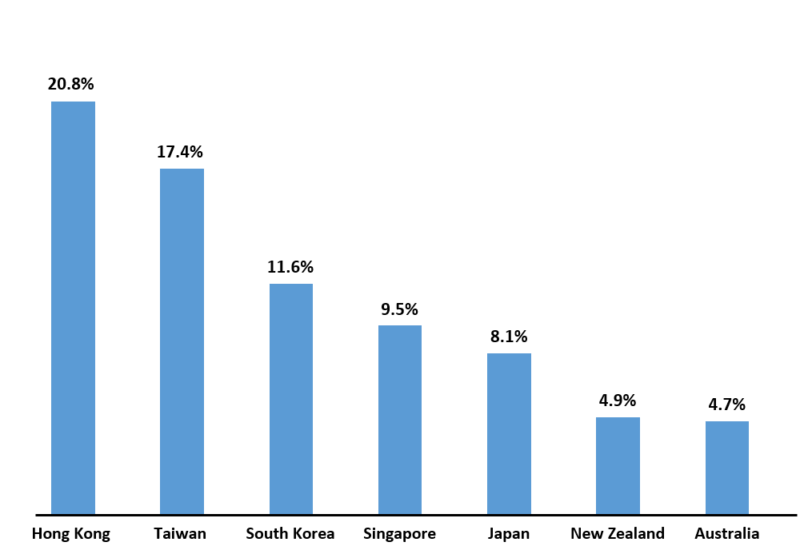 In the past, the markets grew very quickly, but some markets have lost momentum in the meantime. China, India, and Vietnam are growing very strongly, while Australia, Japan, and South Korea are shrinking. In China, India, and parts of South East Asia, households accumulate wealth, and the middle class is growing rapidly. The region’s private household wealth will surpass North American households in the coming years. In China, the number of middle-class households is expected to reach 109 million and 83 million in India. In addition, it is likely that Indonesia, a country with a population of more than 270 million people, may become the world’s seventh-largest economy by 2030, from its 16th position in 2019, rising above Italy, Russia, and South Korea.

Data from other developing markets show that insurance purchases can increase dramatically as per-capita GDP rises. Therefore, we can assume that continued economic growth will also lead to further growth in the insurance market. In light of the continuous high growth rates in India, Indonesia, and especially China and the low insurance penetration rates in these countries, it is expected that the region will achieve average actual growth rates of as much as 7% p.a. in the long term.